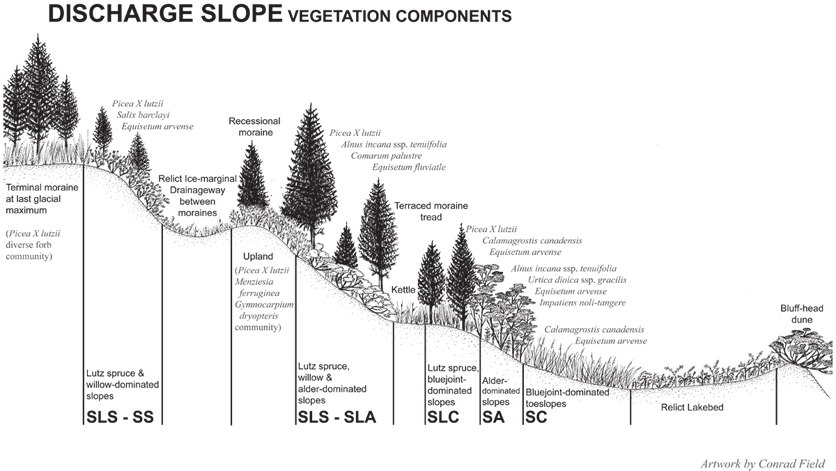 Mapping components of and common plants in Discharge Slope wetlands

Discharge Slope wetlands occur over hydric mineral soils where shallow groundwater discharges at or near the surface. Discharge Slopes typically occur at the transition between wetland and upland where the boundary can be indistinct. These wetlands often support high water tables only seasonally, and therefore can be difficult to identify. Shallow groundwater wells in the Mat-Su Valley indicate that sites with late-season water tables deeper than 150 cm can support hydric conditions sufficient to meet wetland criteria (Clark, 1995). Discharge Slopes are the most extensive geomorphic type on the Kenai Peninsula, and a Discharge Slope dominated by Lutz spruce (Picea X Lutzii) is the most common mapping component there. Especially on the southern Kenai Peninsula, extensive deposits of glacial till, which is saturated, but slowly permeable, support Discharge Slopes (see map figure, above). The unsorted till is most prevalent as terraces along the western front of the Caribou Hills physiographic subdivision of Karlstrom (1964). In other areas of the Basin these till deposits are not so extensive, and can be more permeable.

Discharge Slope components are named after dominant plant species. Broad areas at the toe-slope position of the western margin of the Caribou Hills on the Kenai Peninsula are dominated by Lutz spruce and alder and support near-surface groundwater discharge. In the area between Palmer and Houston, Discharge Slopes are frequently forested with Alaska paper birch (Betula neoalaskana) and/or white spruce (Picea glauca) with an understory of field horsetail (Equisetum arvense). Although the indicator status of paper birch (B. papyrifera) has been changed to facultative in the Cook Inlet Lowlands, it likely does not occur there. However, Alaska paper birch (B. neoalaskana), which is probably the most common species in the region, is listed as facultative upland on the 2013 list of plant indicator status, along with white spruce and Lutz spruce (P. X lutzii), complicating wetland determinations on forested Discharge Slopes in the region. Further complications result because recent taxonomic changes suggest that much of the birch on the southern Kenai Peninsula is B. kenaica which has no status on the wetland plant indicator list (and therefore may be considered an upland plant). Good local knowledge, consideration of the position of the site in the surrounding landscape and augering to depth is sometimes required to accurately delineate these wetlands. 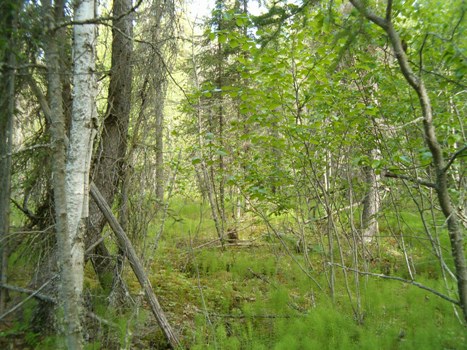 Discharge Slope wetlands are primarily classified in the US Fish and Wildlife Service National Wetlands Inventory (NWI) as forested palustrine wetlands (PFO). Forested wetlands were frequently overlooked on the NWI, which was mapped at 1:63,360. Shrub- and herbaceous-dominated Discharge Slopes are classified as PSS and PEM respectively.

The LLWW Hydogeomorphic classification of Tiner (2003) would classify most Discharge Slope wetlands as Terrene Slope groundwater-dominated Throughflow wetlands. If there is no wetland connected up slope, such as along upper terraces or stream valley walls, then they are Terrene Slope Outflow wetlands. A few have Paludified Slope wetland components, although paludification is uncommon, if present at all on the lowlands.

Box plots of Plant Prevalence Index (PI) in common wetland mapping components. Discharge Slope wetlands (highlighted in gray) exhibit uniformly high values for PI. Prevalence Index is calculated from the percent cover and the wetland indicator status of each plant found in a wetland plot. Lower values indicate a higher prevalence of plants assigned a wetland indicator status of obligate or facultative. Indicator status is assigned nationally, by state, and by regions within states. Prevalence Index may be a better descriptor of the variability of the water table than one-time measurements of the actual position of the water table. Measurements are often made before the water table has had time to fully equilibrate, and are dependent on antecedent conditions. However, if Indicator Status is accurately assigned the plants present will integrate long-term average conditions.

Although Prevalence Index is a good proxy for water table position and variability in many settings, PI may be a less reliable indicator on Discharge Slopes. Lower values of PI should indicate a water table closer to the surface for a longer portion of the growing season. For example, an Index value equal to one indicates that the plot supported only wetland obligate plants (occur in wetlands greater than 99% of the time under natural conditions) and a Prevalence Index value greater than 3 suggests that the plot may not be a wetland for jurisdictional purposes. Prevalence Index may not be as reliable an indicator of water table depth and variation in Discharge Slope wetlands because the bi-modal ecological distribution of many plants can complicate assignment of indicator status. For example, bluejoint reed grass and birch may grow over well-drained soils on south-facing slopes as well as on saturated toe-slopes at the margins of peatlands.. A single value for Prevalence Index is therefore impossible to assign for some plant species. The taxonomic changes discussed above further complicate accurate assignment of indicator status within regions.

However, box plots of water level measurements made during visits to Discharge Slope wetlands generally corroborate the PI values, showing that these wetlands most often occur at the transition between wetland and upland. Median water levels in Discharge Slope mapping components are often near 30 cm below the surface, the wetland cut-off.

Because of these problems with water level variation at the wetland/upland transition, other factors such as slope, aspect, and elevation are more important in driving differences among Discharge Slope wetlands. By contrast, water level variability is very important in peatlands (highlighted in blue in the first graph). Because water level variation is less important in Discharge Slope wetlands, plant species dominance was chosen in place of a hydrologic component to distinguish mapping components. Within the hydrogeomorphic setting of discharge slopes, plant species probably best reflect unique combinations of environmental conditions in different wetlands.

SB: Dominated by birch. Taxonomy of local birches is problematic; tree birches in this project have been designated Betula payrifera, realizing that B. Kenaica is widespread, and other taxa are probably present.

If wetlands above and below: groundwater-dominated Throughflow.

if wetlands above and below. If wetlands only below, then: Terrene Slope Outflow.