Relict Glacial Drainageway wetlands are typically extensive peatlands formed in relict, sometimes abandoned, drainageway features. Drainageways are linear features which drained once more extensive glaciers. Some may have formed along the margins of a glacier. Some support modern streams but these streams are underfit, i.e. the modern stream geometry mismatches valley geometry. Drainageway peatlands are frequently fens, with a generally stable water level close to the surface, supported by ample groundwater throughflow that has had recent contact with mineral substrates. 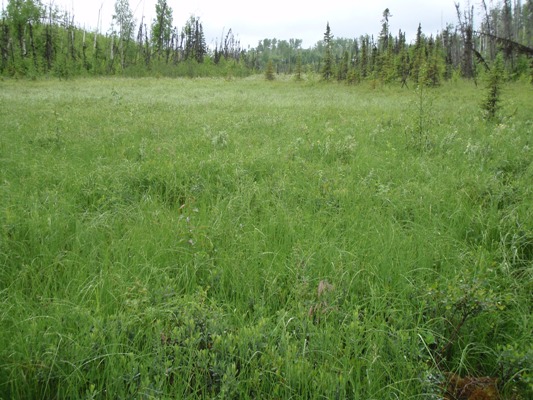 A Relict Glacial Drainageway draining into Threemile Lake in the Matanuska Valley.

Hydrologic Components of Drainageways and Lakebeds

Relict Glacial Drainageways are palustrine wetlands in the US Fish and Wildlife Service’s National Wetlands Inventory classification. Drainageways support a variety of Classes from herbaceous emergents (PEM) to shrubs (PSS) and forest (PFO). The forested subclass is almost exclusively needle-leaved evergreen, but occasionally it is mixed needle-leaved evergreen / broad-leaved deciduous. The shrub subclass is usually broad-leaved deciduous. Hydrologic regimes are generally saturated (B) in the shrub/scrub class (PSSB), although the seasonally flooded/saturated regime is often found where the PEM subclass (PEME) is encountered. The hydrologic regime in the forested subclass often does not fit any of the NWI regimes very well because PFOs on Drainageways do not often support standing surface water, and are only saturated to the surface for a sufficient time during the growing season to meet wetland conditions. Due to the short growing season in Cook Inlet Basin, this period of saturation may be only for a few weeks. The NWI hydrologic regime “saturated” requires saturation to the surface for “extended periods during the growing season”. The water chemistry modifier in Drainageways can be acidic or cicum-neutral (pH > 5.5 in the Cowardin system). The soils modifier is always organic.

Box plots of Plant Prevalence Index (PI) in common wetland mapping components. Drainageway wetlands (highlighted in gray) mapped with lower hydrologic component values (DW2 vs. DW5 for example) have lower values for Plant Prevalence Index. Prevalence Index is a good proxy for water table position and variability. Lower values indicate a water table closer to the surface for a longer portion of the growing season. An Index value equal to one indicates that the plot supported only wetland obligate plants (occur in wetlands greater than 99% of the time under natural conditions). A Prevalence Index value greater than 3 suggests that the plot may not be a wetland for jurisdictional purposes. Bogs on Drainageways (DW5) and forested portions of Drainageways (DW5A) have correspondingly higher values for Prevalence Index than do bogs on Lakebed (LB3) or forested portions of other geomorphic components (e.g. LB6, K4, D4, or SF4). The higher values may indicate that some areas of drainageways support deeper water tables under forests or bogs than in other settings. Inclusions of upland forest are common in modern drainageways. The underlying well-sorted permeable sediments may allow better drainage during dry periods in Drainageways than in other settings where underlying sediments tend to be finer-grained.

DW2: Drainageways with water table near the surface most of the growing season. Often dominated by sedges, dwarf birch and/or sweetgale.