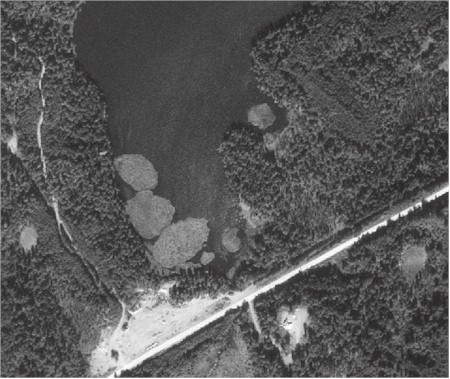 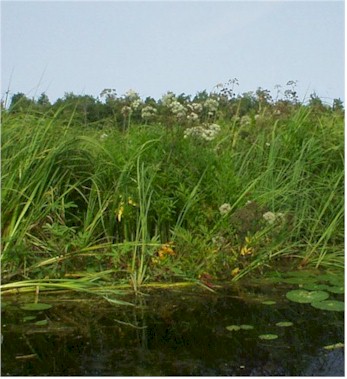 The vegetation on a floating island in Suneva Lake

Floating islands are literally islands floating on a few lakes of the Kenai Lowlands. They were formed when the outlet of a peatland was dammed by road construction. On the black & white aerial photo above, taken near Nikiski in 1996, the peatland was flooded forming Suneva Lake, leaving several vegetation mats floating on its surface. These islands are about a hectare (2.47 acres) in size, and one was observed drifting 1 kilometer over the course of three hours with a breeze of less than 5 mph.

On Beluga Lake in Homer, a lake formed as a floatplane landing base by construction of a causeway, occasional small mats of bluejoint reedgrass calve from floating mats along the lake margin during high water events. These 25 square meter ‘islands’ float quickly with the wind, eventually lodging against the causeway (Lake Street), where they are removed.

Soils are not described, but are entirely organic. Based on a couple of nearby measurements, the mats are probably up to about 3 meters thick.

In the HGM system, Floating Islands are classified as Lentic Island Floating mat throughflow wetland. Throughflow, because both Suneva and Beluga Lake have inlets and outlets.

Bluejoint floating mat is the only plant community documented for this ecosystem and is represented by a single plot: