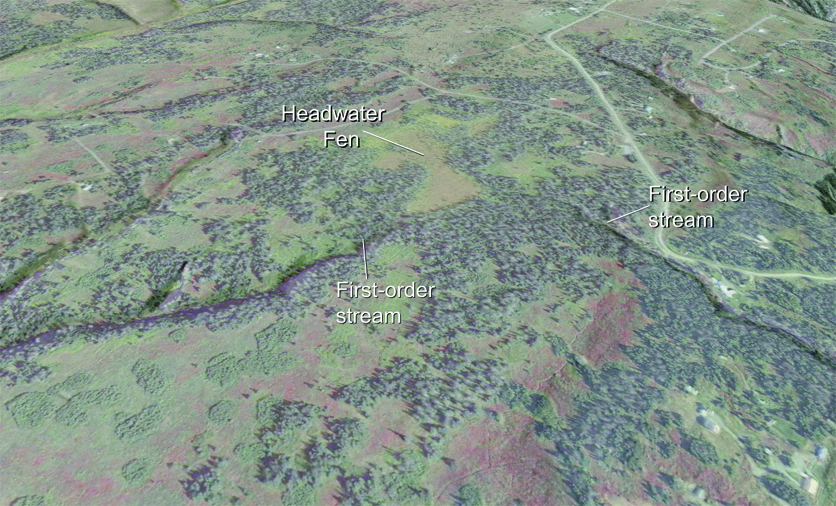 A shaded-relief satellite image showing a Headwater Fen straddling the divide between two first-order tributaries of the City of Homer’s drinking water supply. 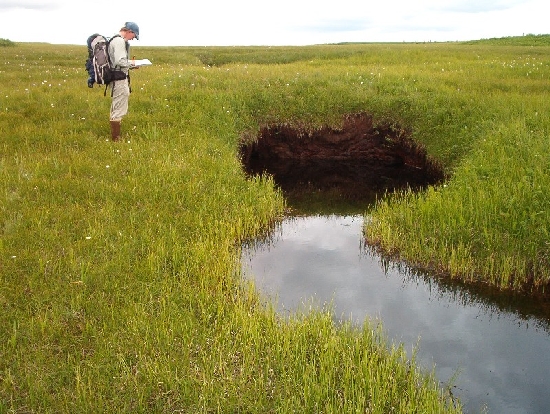 A stream emerging from beneath peat in a Headwater Fen at the headwaters of the Anchor River on the Kenai Peninsula. 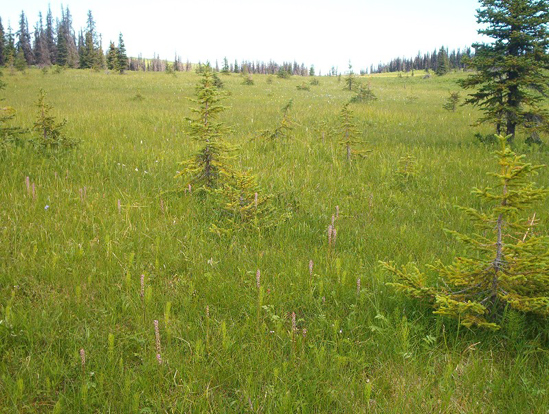 A diverse Headwater Fen supporting a healthy population of elephanthead lousewort (Pedicularis groenlandica), a rare plant in the State of Alaska, listed as S1S2 by the Alaska Natural Heritage Program.

Headwater fens may be a particularly important energy source at the center of stream food webs. Insects obtain part of their food from the micro-organisms that process carbon exported from Headwater Fens. Larger organisms, such as anadromous fish then feed on the insects (Peterson, et.al., 1986).

Headwater Fens fit into the US Fish and Wildlife Service’s National Wetland Inventory palustrine category. They are typically a combination of shrub-scrub and emergent palustrine systems (PSS/EM).

A comparison of water chemistry and the range of water table fluctuations of wetland mapping components in the Cook Inlet Basin. Headwater Fens (H2 and H3, highlighted in blue) have relatively stable water tables near the surface throughout the growing season. This is probably due to late snowmelt at the higher elevations where these wetlands are found. Specific conductance and pH are relatively low, reflecting the dominance of precipitation as a water source, and smaller input of groundwater to these high-elevation wetlands. D = Depression, K = Kettle; S = Discharge Slope; LB = Lakebed; SF = Spring Fen; RT = VLD Trough; R= Riparian; H = Headwater Fen; DW = Drainageway.

H2: Headwater Fens with water table near the surface most of the growing season. Often dominated by sedges.