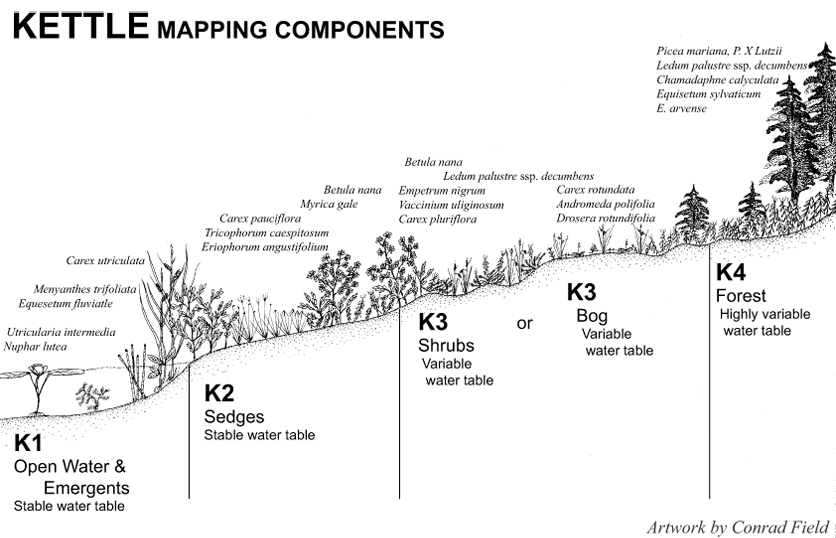 Range of wetlands mapped as Kettles.

Kettle wetlands are peatlands occupying depressions created when ice-blocks entrained in glacial till melted at the end of the last glacial advance (ice-block depressions). Kettles have a wetland or stream connection to Cook Inlet, unlike Depression and Spring Fen wetlands, which also formed in ice-block depressions. Depressions and Spring Fens are surrounded by uplands. Kettles are common and widespread throughout the Cook Inlet Lowlands. They occur on and adjacent to glacial moraines, and gradually grade to Lakebeds along moraine margins, especially on the edge of the moraine that was closer to the former glacier. 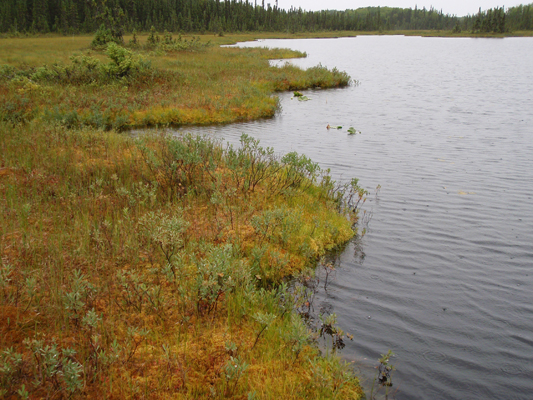 A Kettle south of Big Lake.

Kettles fit into the US Fish and Wildlife Service’s National Wetland Inventory Palustrine category. Kettles support a variety of Classes from herbaceous emergents (PEM) to shrubs (PSS) and forest (PFO). The forested subclass is usually needle-leaved evergreen, but occasionally it is mixed needle-leaved evergreen / broad-leaved deciduous. The shrub subclass is usually a mix of broad-leaved deciduous and evergreen. Hydrologic regimes are seasonally flooded/saturated conditions in the PEM subclass (PEME). The hydrologic regime in the shrubby and forested subclasses often does not fit any of the NWI regimes very well because in Kettles PSSs typically and PFOs rarely support standing surface water, and are only saturated to the surface for a sufficient time during the growing season to meet wetland conditions. Due to the short growing season in Cook Inlet Basin, this period of saturation may be only for a few weeks. The NWI hydrologic regime “saturated” requires saturation to the surface for “extended periods during the growing season”. The water chemistry modifier in Kettles is usually acidic and the soils modifier is organic.

The LLWW Hydrogeomorphic classification (Tiner, 2003) would classify most Kettles as Terrene Basin groundwater-dominated throughflow wetlands. When the Kettle is occupied by a central lake, greater than 20 acres and deeper than 6.6 feet, it would be named a Lentic Fringe throughflow wetland. Some may also form the headwaters to small streams, in which case the modifier “headwater” is appended.

Box plots of Plant Prevalence Index in common wetland mapping components. Kettle wetlands (gray) mapped with lower-numbered hydrologic components (K2 vs K4 for example) have lower values for Plant Prevalence Index. Prevalence Index is a good proxy for water table depth and variability. Lower values indicate a water table closer to the surface for a longer portion of the growing season. An Index value equal to one indicates that the plot supported only wetland obligate plants (occur in wetlands greater than 99% of the time under natural conditions). A Prevalence Index value greater than 3 suggests that the plot may not be a wetland for jurisdictional purposes. Prevalence Index values in Kettle wetlands are wide ranging, occasionally exceeding PI = 3 in areas mapped as forested (K4) or shrubby (K3). The wide-ranging values suggest that precipitation, rather than groundwater, dominates inputs, and that water tables fluctuate widely during the growing season. For example, although the median values of wetlands mapped as K2 or K3 are similar to the median values of wetlands in other geomorphic settings that are also mapped using the hydrologic component number 2 or 3 (e.g. DW2 or DW3, the equivalent Lakebed component to K3 is LB4), Kettles more often show higher values for PI. This may be due to generally lower inputs to Kettles from groundwater, which would tend to stabilize water levels throughout the growing season, and higher reliance on precipitation, which can be highly variable seasonally. Further, Kettles often occur at higher elevations in their local watersheds, suggesting a reduced potential for contributions of discharge from up-gradient watershed elements.

Box plots of specific conductance (SC- blue) and pH (brown) in the common geomorphic types. A few values for specific conductance greater than 300 micro-Siemens/cm are not shown. Kettle wetlands have intermediate values of SC and pH; between common values found in Lakebeds and values in Drainageways. Lakebeds are frequently fed primarily by precipitation, while Drainageways have a stronger ground water influence. The intermediate values suggest that precipitation is a major component of water budget inputs, but that discharge from ground water may be important to many Kettles.

K1: Kettle pond. If larger than 20 acres, the kettle is classified as a Lake.

K2: Water table at or very near the surface, often sedge-dominated.