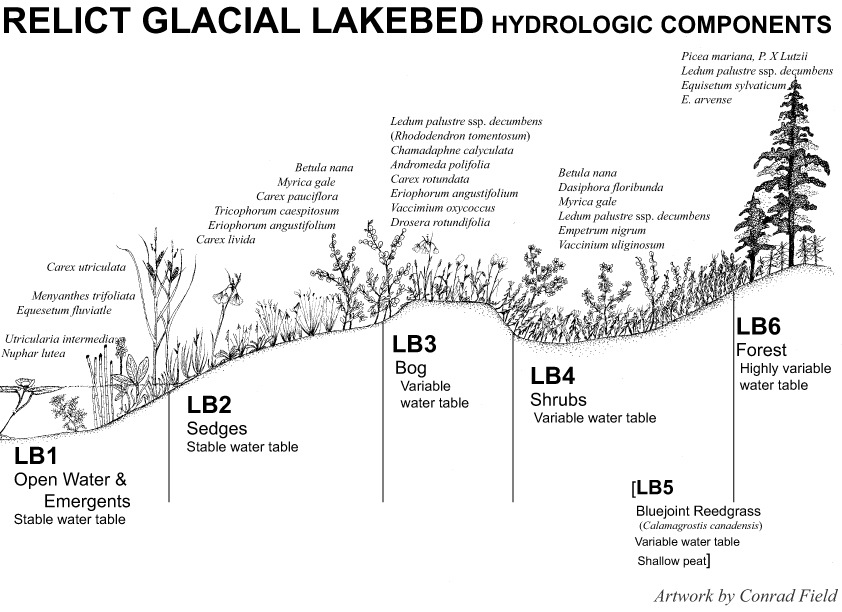 An idealized cross-section showing the Hydrologic Components and common plants of a Relict Glacial Lakebed wetland. Drawing by Conrad Field.

Range of wetlands mapped as Lakebeds.

Relict Glacial Lakebed wetlands are extensive peatland complexes occurring on expansive flat-to-gently sloping surfaces that formerly supported proglacial lakes. Peatlands develop on these surfaces through a process known as primary peat formation. In contrast to lake in-filling, the most familiar model of peatland formation, primary peat formation proceeds where peat builds up over large, flat marshy areas. The marshy areas occur where drainage networks are poorly developed, such as over relict glacial lakebeds, interfluvial areas on glacio-estuarine flats and at watershed divides where topographic relief is low. The original marshes may have been fed by ground water discharge that is recharged at distant features such as moraines or upland hills, or simply by ample precipitation, which drains slowly from the flat landform. Primary peat formation is the process responsible for most of the peat found worldwide.

In the Cook Inlet Lowlands, Lakebed peatlands are often interspersed fens and bogs. Patterning is often present, where low-lying pools, which can dry up seasonally to form mud-bottoms (flarks), are separated by intervening linear strangs (low shrubby ridges). The linear strangs are oriented perpendicular to porewater flow through the peat. Tree islands are common. Tree islands may indicate areas where bog peat is forming over fen peat. Bog formation is common in the Susitna Valley west and north of Houston, where bogs may form over a layer of fen peat, or directly over the underlying mineral sediments. However, bog water chemistry and plant indicators are almost completely absent from the Kenai Lowlands. The absence may be due to the steady supply of tephra (volcanic ash) to Kenai peatlands, unlike in the Susitna Valley. The tephra contains some calcium, which may inhibit germination of the sphagnum mosses that initiate bog formation. However, even as bog indicators are almost completely absent on the Kenai Lowlands, bog hydrology may be common in larger Kenai peatlands. Further investigation into peatland porewater interactions with the ground water in underlying glacial sediments is required before the full extent of peatlands exhibiting bog hydrology can be determined on the Kenai Lowlands.

Comparisons of 2005 satellite imagery with 1960 aerial photography in the Matanuska-Susitna Valley indicates that bogs and fens appear to be in stable equilibrium; neither the fens nor bogs appear to be expanding or contracting. Small mounds of sphagnum moss only meters in diameter are the same size and in the same position in 2005 as they were in 1960 (see images below). Bog mound extent is limited by hydraulic conductivity and distance to bounding streams; mounds typically develop on broad interfluves or at watershed divides with low topographic relief. The bogs may be stable because relict lakebeds in the photos support a drainage network sufficient to prevent bog mounds from enlarging. Alternatively, bog expansion in the Matanuska-Susitna Valley may be limited by the relatively low amount and pronounced seasonality of precipitation there compared to other regions of bog formation. 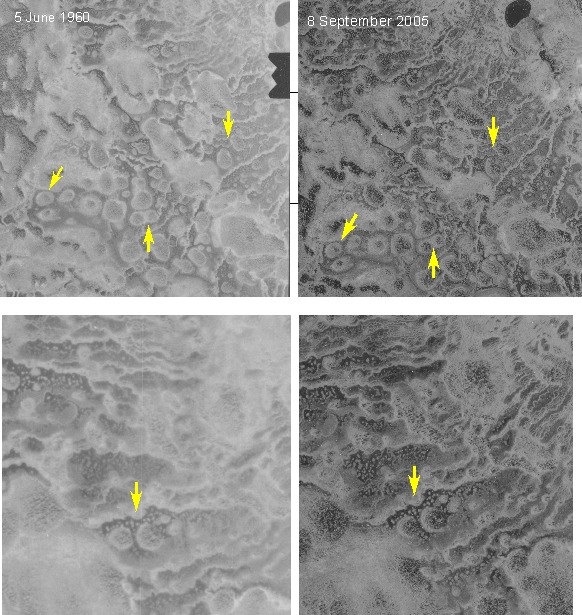 Bog islands in 1960 (left) and 2005 (right). Yellow arrows point to the same areas on both images. Note that the small light-colored dots, which are cushions of Sphagnum papillosum, an important bog initiator, are the same size and in the same position on both of the lower pair of images. The 1960 images are not ortho-rectified.

Relict Glacial Lakebed peatlands are larger than Kettles, which also form on abandoned lakebeds. The centers of large Lakebed peatlands are far removed from uplands, so surface water runoff originating from mineral sources appears distant. However, the mineral soil is never further than several meters away, beneath the peatland. Many fens, especially in the Matanuska-Susitna Valley, receive groundwater discharge from beneath, through sandy underlying lake sediments. Although the surface water chemistry of these peatlands may indicate bogs, the porewater chemistry in the peat a meter below the surface is frequently markedly different in this hydrogeologic setting. A bog may be present, but the bog peat may be restricted to a thin layer overlying a thicker layer of peat with fen porewater chemistry. 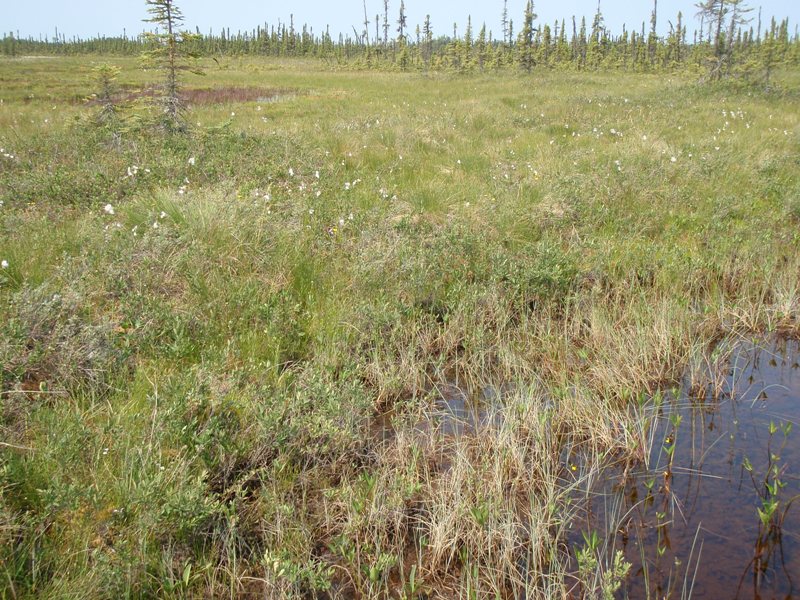 Hydrologic Components of Drainageways and Lakebeds

Lakebed peatlands are large complexes composed of many elements that function differently. An element of the watershed is defined as a homogeneous area that functions differently from adjacent areas. Bogs are by definition recharge mounds, therefore elements on a Lakebed mapped with an LB3 hydrologic component in the Cook Inlet Classification support ground water recharge. There is evidence that the recharge from bog mounds may reach deep into the underlying mineral sediments. Bogs also store precipitation and contribute discharge to elements lying down-gradient. Areas of Lakebed peatlands mapped with the LB1 or LB2 components support stable water levels above or very near the surface throughout much of the growing season. Although significant storage capacity is available even when the water level is above the surface due to the elasticity of the peat aquifer, these elements most often function to transmit pore water to down-gradient elements of the wetland or directly to streams, when they are adjacent to them. Some streams originate in Lakebed complexes, especially those mapped as Rel, which are often formed over streambeds composed of peat. Areas of Lakebed mapped with the higher-numbered hydrologic components, LB4, LB5, and LB6, more frequently function to store precipitation, and contribute discharge to elements of the wetland lying down-gradient. Areas mapped with these hydrologic components more often support more variable water levels further beneath the surface (see the figure below, Plant Prevalence Index on Common Wetland Mapping Components). The deeper water level indicates that a larger volume of pore space is more frequently available for storage, and the variability shows that, once filled, the pores drain to down-gradient elements. A water budget analysis and a mixing model showed that Lakebed peatlands contribute over half of the stream flow to an anadromous tributary of the Anchor River one day during the summer dry period.

Lakebeds are Palustrine wetlands in the US Fish and Wildlife Service’s National Wetlands Inventory (NWI) classification. Lakebeds support a variety of Classes from herbaceous emergents (PEM) to shrubs (PSS) and forest (PFO). The forested subclass is almost exclusively needle-leaved evergreen, but occasionally it is mixed needle-leaved evergreen / broad-leaved deciduous. The shrub subclass is usually a mix of broad-leaved deciduous and evergreen. Hydrologic regimes are generally saturated (B) in the shrub/scrub class (PSSB), although the seasonally flooded/saturated regime is often found where the PEM subclass (PEME) is encountered. The hydrologic regime in the forested or shrubby subclass often does not fit any of the NWI regimes very well because PFOs on Lakebeds rarely support standing surface water, and are only saturated to the surface for a sufficient time during the growing season to meet wetland conditions. Due to the short growing season in Cook Inlet Basin, this period of saturation may be only for a few weeks. The NWI hydrologic regime “saturated” requires saturation to the surface for “extended periods during the growing season”. The water chemistry modifier in Lakebeds is usually acidic, although where tephra deposition is chronic, or where ground water discharges to near the surface, cicum-neutral (pH > 5.5 in the Cowardin system) conditions may be present. On lakebeds, the soils modifier is always organic.

In the LLWW Hydrogeomorphic classification system of Tiner (2003) many Lakebeds fit loosely into the Terrene Flat/Slope groundwater-dominated throughflow category. In the Susitna Valley, Lakebed wetlands often support bog development. Bogs are Terrene Flat Outflow wetlands because they only receive water from meteoric sources, but they recharge adjacent fens, which are contiguous with the bog over the larger lakebed landform. Bog peat likely overlies a layer of fen peat on most Lakebeds. On the Kenai Lowlands bogs are difficult to identify due to the constant deposition of tephra. The tephra masks floristic and water chemistry indicators of bog hydrology. Although many of the peatlands that have formed over Lakebeds and other landforms on the Kenai Lowlands may function hydrologically as bogs, they will require a closer investigation of porewater interaction with ground water before they can be accurately identified.

Some Lakebeds may have once been created by paludification, but that process is probably not active in most Cook Inlet lowland peatlands because precipitation is too low and seasonally distributed. Many form the headwaters to small streams, particularly short-run streams near the coast.

Box plots of Plant Prevalence Index in common Lakebed mapping components (highlighted in gray). Lower-numbered components have lower values for Prevalence Index, and higher-numbered components have higher values (for example compare LB2 with LB6). Ponds (LB1) almost exclusively support wetland obligate plants. Forested components (LB6) sometimes support Index values > 3. Bogs on Lakebeds (LB3) tend to support lower Index values (are wetter) than bogs on Drainageways (DW5). Lakebed bogs may be wetter because they tend to occur throughout these flat landforms, while bogs on the more linear landforms of Drainageways tend to occur along their margins, further from stronger groundwater influence. The marginal bogs on Drainageways tend to be forested, while bogs on Lakebeds are forested or open.

Box plots of specific conductance (blue) and pH (brown) on Lakebeds (gray). The median of pH is lower than in many other geomorphic settings, however a wide range values is also present. This wide range likely represents the differences between Lakebeds on the Kenai Lowlands, where chronic tephra deposition raises pH, and the Susitna Valley, where typical bog chemistry is more common on Lakebeds. Specific conductance is generally lower than in other geomorphic settings, reflecting greater contributions from precipitation, although the long tail of higher values suggests that ground water contributions from underlying mineral sediments occasionally reach the surface. Intermediate values are likely influenced by tephra on the Kenai Lowlands.

LB2: Water table near the surface most of the growing season, often dominated by sedges.

LB6: Forested, typically by black spruce. When a forested bog the map unit is qualified by the LB3 component: LB63 are forested bogs.

LBSF: A complex of patterned fen with small high ridges (strangs) alternating with low pools or hollows (flarks) and bog islands which may or may not be forested.