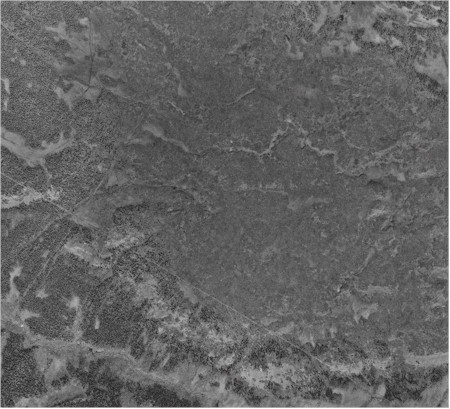 The plateau surrounding the USGS ‘Eagle Lake’ monument on the southern Kenai Peninsula, Alaska (northern half of the Seldovia D4-SE quadrangle). All of the medium-dark gray signature, which covers the majority of the photograph, is the Barclay’s Willow Rich plant community of the Late Snow Plateau map unit. The photo covers an area of about 5 x 5 miles.

Areas above 500 meters elevation on the Kenai Lowlands project area

Late Snow wetlands are restricted to elevations above about 500 meters on the Kenai Lowlands, where the snow-free season is short. Snowmelt from late-lying patches keeps the ground saturated near the surface throughout the growing season. These gentle slopes occur extensively over poorly drained soils and late-melting snow patches on the plateaus of Bald Mountain and near the USGS ‘Eagle Lake’ monument in the Caribou Hills.

Late Snow Ecosystems are confined to higher elevation, dense till on the surfaces of older glaciations (Marine Isotope Stage 4 & 6- formerly named as Knik and Caribou Hills in Alaska), where the till is discontinuous. The dense till perches a water table, holding snowmelt throughout the growing season.

Below the plateaus lie steep-sided, typically well-drained Knik surfaces. Till is frequently very thin or absent from these early Wisconsin aged-surfaces (or MIS 3 interglacial?), and headwater stream valleys are incised deeply into Tertiary sediments. Many of the first-order streams in the headwaters of the Anchor River and to a lesser extent, Deep Creek drain from Late Snow Plateaus and across those steep tertiary sediments.

Below the steep Knik surfaces (MIS 3?) lies continuous dense till, which often perches a water table and supports many diverse wetlands. Thus, Late Snow Plateaus are separated from lower elevation wetlands by a steeper well-drained surface, resulting in an odd combination of wetlands above, on the plateaus, and below on dense till, but not in between, on the steeper, better-drained interglacial surface. 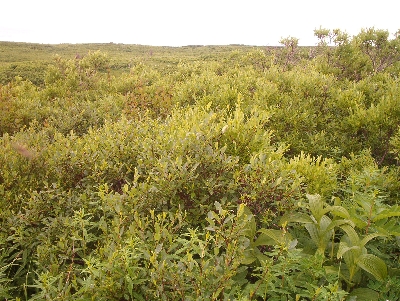 The Late Snow Ecosystem consists of one map component: the Late Snow Plateau, occupied by a diverse Barclay’s willow community on a wet mineral soil (almost always of the hydric Snowdance series). On Late Snow Plateaus, a mantle of wind-carried sediment and volcanic ash lies over a thin layer of poorly sorted glacial till. The flat, till covered landscape combined with late-lying snow perches a water table. As the Eklutna glaciation was an older event, the till is thin, and in many places absent. Where it is absent the soil is better drained, so that all plateaus above 500 m are not necessarily Late Snow Plateau wetlands.

The US Fish and Wildlife Service National Wetland Inventory (NWI) would classify the Plateaus as Palustrine Shrub-Scrub wetlands (PSS).

An Hydrogeomorphic Model classification (HGM) would place almost all of them into the Terrene Slope groundwater-dominated Outflow headwater class (Tiner, 2003).